US supports Cyprus solution based on a bizonal, bicommunal federation, USUN Ambassador-Nominee says 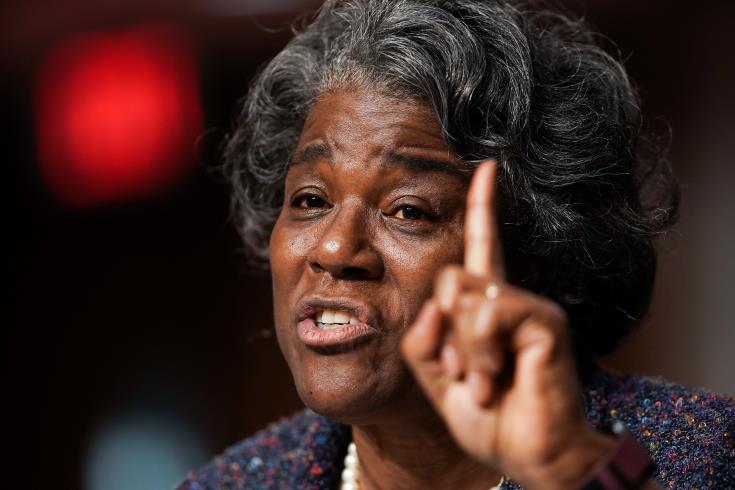 The United States supports a Cypriot-led comprehensive settlement to reunify the island as a bizonal, bicommunal federation, which would benefit all Cypriots as well as the wider region, USUN Ambassador-Nominee Linda Thomas-Greenfield has said, replying to written questions by Senator Bob Menendez, Chairman of the Senate Committee on Foreign Relations.

Asked about the UN Secretary-General`s interest in convening an informal 5+1 meeting this year, she stressed that “the United States supports a Cypriot-led comprehensive settlement to reunify the island as a bizonal, bicommunal federation, which would benefit all Cypriots as well as the wider region.”

“We welcome and stand ready to assist the UN Secretary-General’s efforts to convene an informal 5+1 meeting at the earliest opportunity and facilitate a relaunching of political discussions after years of stagnation,” Thomas-Greenfield noted.

We hope, she added,  “that all involved participants will approach the 5+1 meeting in the spirit of openness, flexibility, and compromise.  The responsibility for finding a solution lies first and foremost with the Cypriots themselves.”

Replying to a question about Turkey`s and the new Turkish-Cypriot leader`s violation of UN Security Council Resolutions on Cyprus by moving to reopen Varosha, she stressed that the “United States is deeply concerned by the unilateral decision by Turkish Cypriots, with the support of Turkey, to reopen Varosha and urges a reversal of this decision.”

She noted that the United States stands by the UN Security Council President’s statement unanimously approved in October 2020.

“We see the reopening of Varosha as inconsistent with UN Security Council Resolutions 550 and 789, provocative, and counterproductive to the resumption of settlement talks.  The United States supports efforts to de-escalate tensions in the Eastern Mediterranean and calls for dialogue and respect for international law” she underlined.

Regarding the renewal of UNFICYP’s mandate, she said “I was pleased to see the unanimous renewal of the UN Peacekeeping Force in Cyprus (UNFICYP) on Friday, January 29, extending the mission’s important work in preventing a resurgence of fighting between the Greek and Turkish Cypriot communities, supervising ceasefire lines, maintaining a buffer zone, and supporting the good offices of the Secretary-General for six months”.

Cyprus has been divided since 1974, when Turkey invaded and occupied its northern third. The latest UN backed round of talks took place in the Swiss resort of Crans Montana but failed to yield any results.

The Turkish side illegally opened on October 8 part of the beach of the abandoned town of Famagusta, in violation to numerous UN resolutions.

Varosha, the fenced off section of the Turkish occupied town of Famagusta, is often described as a ‘ghost town’. UN Security Council resolution 550 (1984) considers any attempts to settle any part of Varosha by people other than its inhabitants as inadmissible and calls for the transfer of this area to the administration of the UN. UN Security Council resolution 789 (1992) also urges that with a view to the implementation of resolution 550 (1984), the area at present under the control of the United Nations Peace-keeping Force in Cyprus be extended to include Varosha.