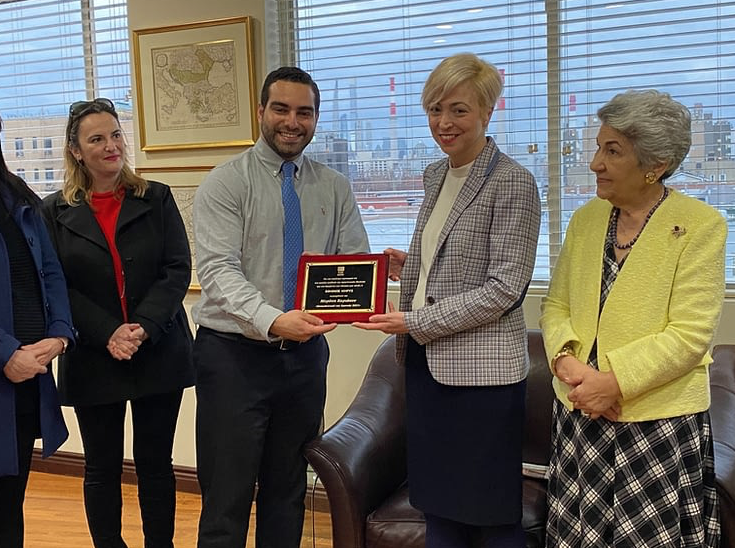 The National Herald Educator of the Year was presented by co-editor/co-publisher Eraklis Diamataris to Meropi Kyriacou, Principal of The Cathedral School in Manhattan. Among those present was Stella Kokolis, at right, Federation of Greek American Educators President. Photo: TNH/ Christodoulos Athanasatos

At the award ceremony which, as usual, took place at TNH’s offices, Kyriacou accepted the distinction and the praise from the newspaper’s management and her colleagues, who attended the event in her honor, recognizing, at the same time, the effort she makes in the difficult task of transmitting Greek education to the children of the Greek Diaspora and beyond.

Meropi Kyriacou was born in Nicosia, Cyprus, and is a graduate of the Law School of the University of Athens with a master’s degree in Humanities. She attended seminars and training programs on the teaching of Greek as a second foreign language and is currently doing her PhD on the “cultural identity of Greek immigrants.” She has worked as a cultural editor at the daily morning newspaper Alithia in Nicosia, having the responsibility beyond the daily columns, the Saturday Cultural insert. She also worked for the magazine Telerama as well as the Athens-based film magazine Screen Eye.

TNH co-editor/co-publisher Eraklis Diamataris, praised Kyriacou, and the work of Greek teachers in general, citing as an example his own experience and what he learned from his teachers, being a Greek child of the Diaspora .

“On behalf of the National Herald, I congratulate you on your work, I understand how much work and effort you put into what you do and with what love you do it. It is not only us who appreciate you, but also the children, whose life you change more and more for the better every day. It is a great responsibility for the children to leave their home every day and to come to you and for the parent to trust that the children will return from school not only better students, but also more well-rounded people,” said Diamataris.

TNH Advisor to the Publishers Antonis H. Diamataris referred to the reason for establishing the award 25 years ago, but also the need to promote and strengthen the work of teachers, through what he called a “peaceful revolution.”

“We started this award 25 years ago. We started it because I have to tell you that we have an anxiety and a pain, that unfortunately we do not give enough importance and attention and recognition to our educators as a society, as a community. We know from our history that the fact that we survived is to a large extent due to the teachers and the priests. No community can survive if it does not respect, recognize and strengthen the work of those who educate our children and instill in them the principles and values ​​of our people and nation. We said we would try to fill as much as possible this large gap that exists, to honor every year an educator whom we consider to have contributed significant service,” said Diamataris, adding that the choice of Meropi Kyriacou for this year’s award was unanimous.

“We express our gratitude to an educator who has offered so much up to this point. She took on her position at The Cathedral School in difficult times, but there is a positive: any improvement will be seen in a greater light. Thank you, we need you, it is a difficult struggle with many challenges, but this generally happens in all institutions. Those who have the passion and the sense of duty and mission in the end succeed,” said Diamataris.

Federation of Greek American Educators President Stella Kokolis spoke warmly about the career of Meropi Kyriacou and expressed confidence that she will succeed in the difficult task as Principal at The Cathedral School.

“The appreciation you offer to teachers every year is an appreciation for the entire Greek community, because the teacher not only reflects the language, but also our culture, history, customs and traditions. For me, it is more necessary for our children to know our culture, what is ours, what are our traditions, even if they do not speak Greek so well, to think, to have Greece in them. What Mr. Diamataris does helps this work of the teachers who, in the snow, cold, without much money, go and teach the children of the Greek Diaspora for this purpose. As for the diamond of our Education, I have to say that I am personally proud of The Cathedral School that belongs to the whole Greek Diaspora. I hope its value is recognized. Meropi is a rising star and I really firmly believe that she will continue our great struggle,” said Kokolis.

Receiving the award, Kyriacou thanked TNH for the honor, expressing gratitude for her colleagues at The Cathedral School, but also for the Greek Diaspora as a whole.

“First of all, thank you very much. I think I still have more to contribute. I cannot say that I was expecting this award, because, really, I expect things from myself. The Greek community needed me, you said, but I probably also needed the Greek community, because it has changed my life and my course. Thank you very much again, as well as everyone who is here,” said Kyriacou, visibly moved by the honor.

Costas Eliades, Chairperson of The Cathedral School Board, also expressed his belief in the possibilities and the ethos of Meropi Kyriacou.

“Congratulations to Meropi Kyriacou, our Principal, who has so many talents. We are very happy to have appointed her as principal this year. It has led our school to greater heights and other paths. I also thank Mrs. Kokolis, The National Herald, Antonis, Eraklis and Vanessa Diamataris. It’s beautiful what you do every year, turning the spotlight on the educators. Meropi’s award is for the entire Greek community,” said Eliades.