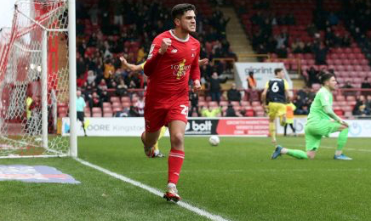 Orient leave it late again as Theo Archibald’s injury time goal earns the O’s a point against Stevenage in E10.

Archibald’s stunning strike means that Orient have now rescued a point in their last two matches with a goal in stoppage time.

Luke Prosser’s header put the visitors ahead in the first half before Ruel Sotiriou equalised for The O’s with a fine finish. Stevenage though, got back in front just two minutes later when Luke Norris fired his effort past Lawrence Vigouroux from around 25 yards out. It seemed as if Stevenage’s first half goals were enough to earn them all three points before Archibald’s shot flew into the top corner in the fourth minute of injury time.

Leyton Orient Interim Manager, Matt Harrold, was forced into making one change to the team that started against Colchester United. Otis Khan missed the match after picking up a knock and was replaced by Theo Archibald who returned from suspension.

Paul Tisdale named an unchanged line-up for the first time since he took charge of Stevenage in November. His team came into the match having gone four matches without scoring a goal.

The game’s opening exchanges were confined to the middle third of the pitch as both teams attempted to gain midfield supremacy.

The first shot of the match arrived after ten minutes when the two goal scorers from Orient’s 2-2 draw in midweek almost combined to put The O’s ahead. Ruel Sotiriou found space on the Orient left and played a pass to Ethan Coleman on the edge of the penalty area. Coleman showed quick feet to evade two challenges before his shot was blocked. Sotiriou was quickest to the rebound but could only fire his effort wide of the Stevenage goal.

Jake Taylor came close to opening the scorers for the visitors when his low shot forced an agile save from Lawrence Vigouroux in the Orient goal. Taylor was forced to take his shot from a tight angle after finding space behind Connor Wood.

Stevenage did eventually go in front when Luke Prosser met a Luke O’Neill cross and looped his header into the far corner of the goal. The Boro had been in the ascendency in the minutes leading up to the goal as a succession of corners put real pressure on The O’s defence. The Orient players felt that Prosser should have been penalised for a push but referee, Darren Drysdale, saw no reason to disallow the goal.

On a day when engineering work on the central line made travel in East London particularly disjointed, Ruel Sotiriou found his way around the Stevenage defenders with consummate ease. He equalised for Orient after his expertly timed run was found by Darren Pratley’s lofted through ball. Sotiriou fired the ball past the onrushing goalkeeper and into the top left corner to score his second goal in as many matches. The Stevenage players claimed Sotiriou had been offside but the referee gave the goal after a long deliberation with his assistant on the far side.

Luke Norris’ put the visitors back in front just two minutes later with a powerful strike from distance. He ran on to Stevenage goalkeeper, Christy Pym’s long clearance and fired his effort, first time, over Vigouroux and into the net from around 25 yards out.

Matt Harrold elected to make a substitution at half-time as he brought on Paul Smyth in place of Matt Young.

Orient started the second half brightly and almost equalised when Harry Smith’s shot was saved at full stretch by the Stevenage goalkeeper.

The O’s went close again through Paul Smyth after Ethan Coleman’s tackle won possession on the edge of the Stevenage box. The Orient substitute shot straight at Pym who saved comfortably.

The O’s were forced into making their second substitute after 65 minutes when Connor Wood was caught by a late tackle from Jake Taylor. Shadrach Ogie was introduced in his place.

The second half grew increasingly disjointed as Stevenage attempted to stop The O’s building up any momentum in attack.

In search of an equaliser for his team, Matt Harrold made his third and final change when he replaced Darren Pratley with Frank Nouble.

Theo Archibald and Paul Smyth consistently attempted to create a chance for Orient as they combined on several occasions on the right wing. The Stevenage defence though, held firm.

Theo Archibald rescued a point for Orient in the 94th minute of the match. Archibald unleashed a strike with his left foot into the top corner of the goal leaving Christy Pym no chance in goal.