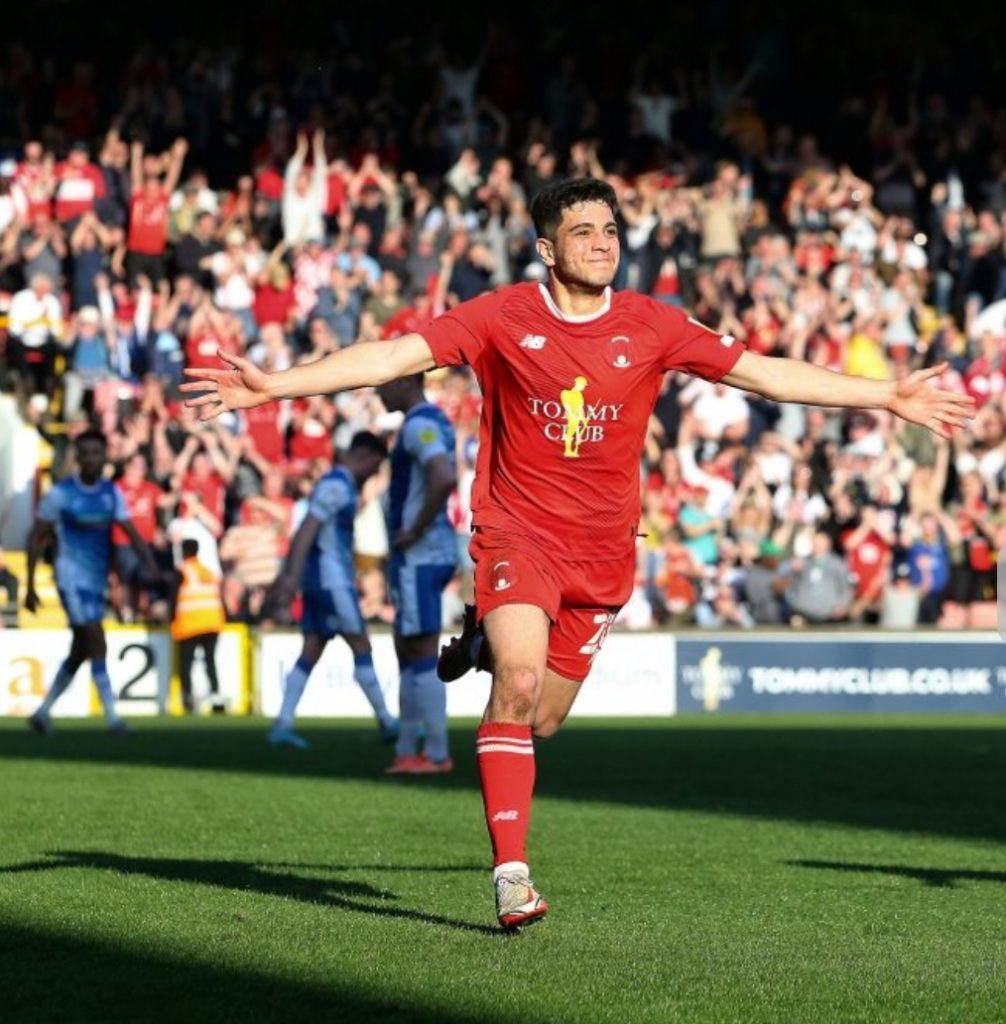 Ruel Sotiriou scores again as the O’s earn all three points in convincing win over Barrow in E10.

As the sell-out crowd soaked up the warm spring sunshine, the green shoots of progress under Richie Wellens continued to take root. Orient ran out deserving winners in what was an entertaining contest in East London.

Man of the match Paul Smyth put the O’s ahead shortly after half time when he expertly lobbed the Barrow goalkeeper from a tight angle. The in-form Ruel Sotiriou then put the home side two goals up, showing composure inside the Barrow penalty area before rolling the ball into the bottom corner right corner.

Birthday boy Richie Wellens made one change to the Orient team that won at Harrogate Town on Tuesday evening as Paul Smyth cam into the side at Otis Khan’s expense. All eyes were on Ruel Sotiriou as the Breyer Group Stadium’s sell-out crowd hoped to see the 21-year-old continue his fine goal scoring form.

Phil Brown, in his first game in charge of the Bluebirds, made two changes to the Barrow team that lost at home to Carlisle. Jason Taylor and Remeao Hutton returned to the visitors starting eleven in place of Tom White and Anthony Glennon.

It took just a few minutes of play for it to become clear that Phil Brown had identified Sotiriou as the O’s danger man. The Bluebirds ensured that the Orient midfielder was quickly surrounded by two or three players whenever he picked up the ball in midfield.

The visitors had the first shot of the match when Josh Gordon rose to meet Ollie Banks’ free kick from the right, but the Barrow forward’s effort flew harmlessly over the crossbar.

The O’s got their first sight of goal in the 14th minute when Sotiriou’s shot from the edge of the area deflected kindly into Aaron Drinan’s path, but the Orient forward saw his shot saved by Barrow goalkeeper Paul Farman.

Drinan’s chance seemed to click Orient into gear and the home side began to put the Barrow defence under spells of sustained pressure.

The O’s went close again when Theo Archibald floated a pass over the top of the Barrow defence from the right side of the penalty area. Sotiriou ran beyond the Bluebirds’ back line and did his best Zidane impression as he lifted his right foot up to eye level, seemingly plucking the ball from the sky with the end of his big toe before firing his shot narrowly over the bar.

Richie Wellens’ instructions for his team to keep the ball on the ground were evident in the first half, but Orient were occasionally guilty of holding on to the ball for too long in their own third. The home side could count themselves lucky that Barrow were unable to punish them for it.

Orient were perhaps fortunate not to concede a penalty when John Rooney’s goal-bound effort appeared to strike Adam Thompson’s arm. The referee though, waved play on.

The home crowd witnessed more Sotiriou magic when his free kick hit the bar from around 25 yards out. Paul Farmer stood static in the Barrow goal as the ball cannoned back off the woodwork.

Sotiriou went close again moments later when his glancing header at the near post was well-saved by the Barrow goalkeeper.

The visitors almost scored against the run of play when Aaron Amadi-Holloway’s diving header had Lawrence Vigouroux scrambling across his goal. Fortunately for the O’s, the ball trickled just wide of the far post.

Orient almost broke the deadlock inside the first minute of the second half but, try as he might, Drinan couldn’t quite reach Connor Wood’s cross as it flew through Barrow’s six yard box.

The O’s were ahead in the 52nd minute when Paul Smyth produced a wonderful finish from an absurdly tight angle. Wood’s through ball to Smyth ran just close enough to Farman that the Barrow goalkeeper was tempted to come out to intercept, but he was just too late. Farman was caught high up the pitch as Smyth knocked the ball past him down to the by-line on the left wing. Finding himself looking down the line, almost level with the posts, Smyth spun and audaciously curled a shot over the goalkeeper and into the empty net.

Sotiriou put the home side two goals up ten minutes later as he scored his sixth goal in seven matches. The Orient midfielder showed a cool head and nimble footwork when the ball broke to him inside the penalty area. Sotiriou waited for the perfect moment to fire his shot into the bottom corner past Farman’s despairing dive.

The Bluebirds searched for a way back into the game and almost found one when Josh Kay’s shot from the edge of the penalty area forced Vigouroux into a good save down to his left.

The O’s almost had a third when Omar Beckles’ header forced a good save from Farman.

As the minutes ticked by, the Orient head coach was able to rotate some of his players as first Theo Archibald and then Paul Smyth were rested ahead of the trip to Oldham on Tuesday.

Barrow were kept at arm’s length during the closing stages of the match as the O’s took all three points, enabling Richie Wellens to celebrate his birthday with three hard-earned points.