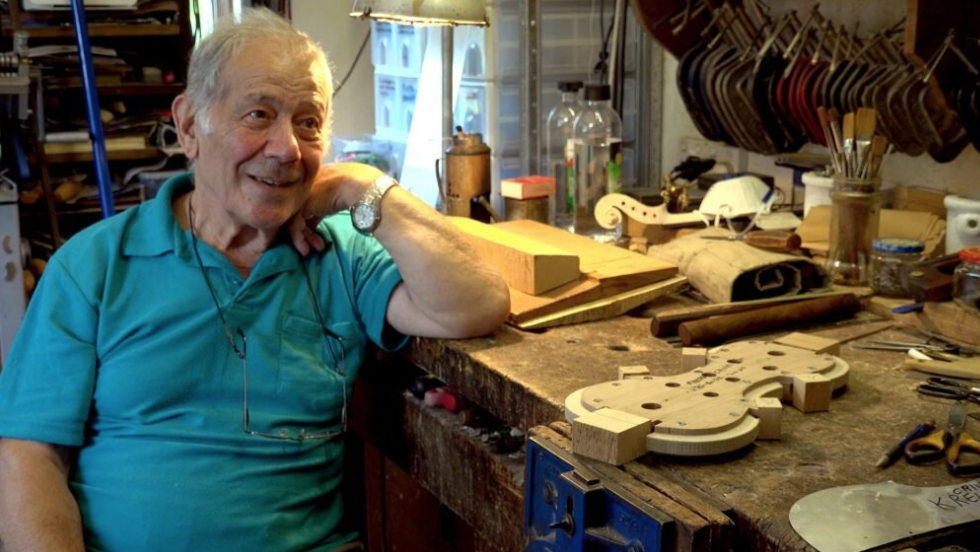 Much like the rings of a tree, each wrinkle, each scar on a human’s body tells the story of a life well lived.

Charalambos Vatiliotis, or Harry, is considered Australia’s greatest living violin maker, and his own hands have seen hundreds of violins pass through them.

Today the 84-year-old reflects on the one fateful mathematics test that changed the course of his life forever.

“I was 16 and I had three years’ experience in the motor garage, because I’ve always wanted to be a mechanic or something to do with machines. When I came here, I picked up the language very quickly, very easily. Maths was impossible because I left school at 12 and started working, so I didn’t pass the entrance exam to get an apprenticeship at the railway workshop,” he told Neos Kosmos.

“Well, I was lucky. The people working in metal always seemed to want to work with wood as a hobby. All the chaps I was working with at the rail workshops had woodworking hobbies, so for a bit of ‘one-upmanship’ I decided to make a violin. That’s where my career was launched, everything seemed to fall into my lap.” 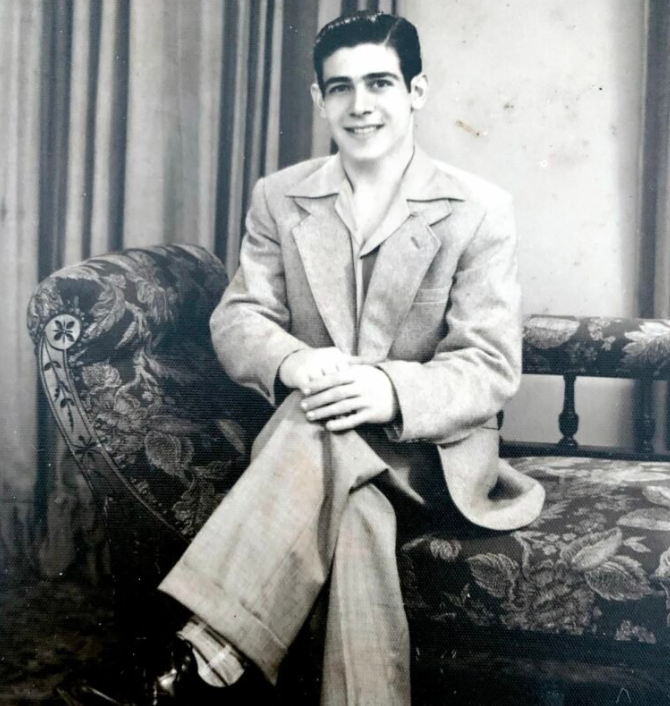 Harry Vatiliotis came to Australia in the early 50s from Cyprus with his family, this was one of the first photos take on him in his new homeland Photo: Supplied
Mr Vatiliotis’ mentor and friend Jackie Pearson recognised the young immigrant’s talent and encouraged him to go and ask for a job at A.E. Smith & Co. Ltd, after reading a piece on the violin maker in the newspaper. This little push began the decades long career creating a violinist’s dream.

Director and producer Carla Thackrah teamed up with producer, professional violinist and composer Romano Crivici to create a documentary about the legendary violin maker, who Mr Crivici has known for 48 years.

“Harry had a passion and an affinity for the violin from an early age. Once he really found the way, he followed his path to the end, not being interested in the promise of fame and fabulous fortune; he just loved creating things with his hands and seeing students and professionals that make his instruments ‘sing’,” Mr Crivici said.

The documentary titled The Last Violin takes us into Mr Vatiliotis’ home in the suburbs of Sydney, unmoved from the house he and his wife purchased over 60 years ago.

“This place is actually ideal for me because I’ve got quite noisy hobbies as well as the violins. For me it was better than winning the lottery when I found this house. It’s surrounded by backyard and the house next door is quite a distance from mine. I can make all the noise I want without annoying everybody,” he said. 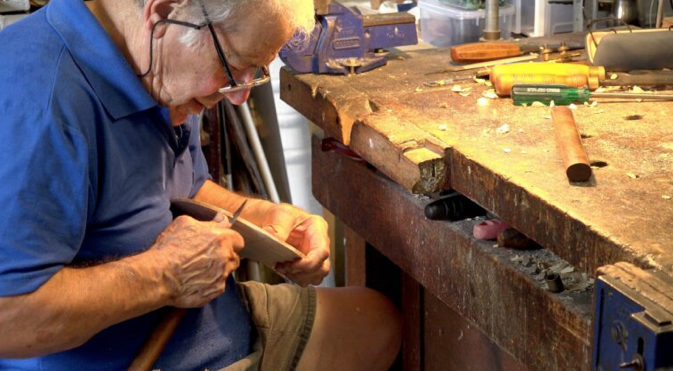 Harry Vatiliotis at work on the belly of The Last Violin Photo: Supplied courtesy of “The Last Violin”
Mr Vatiliotis shares the process of making his last ever violin for his dear friend Mr Crivici and in doing so, the documentary reveals a story encompassing the love, friendship and care that each of the three protagonists shares.

Perhaps the most palpable of his loves is that for his wife Maria. While they both came to Australia from Cyprus in the 1950s, the two didn’t meet until some time had passed after their arrival.

“We were introduced. Maria used to live in Brisbane. My mother, like all Greek women, the minute we landed here, was really worried about me, trying to keep me on the straight and narrow. They were always trying to marry me off to a Cypriot girl. Somebody rang from Brisbane, a family friend, and said ‘I’ve got this smart, beautiful girl, I’m going to send her out to see you’. I thought, ‘If she’s as good as you say, I’m going to marry her’. When I saw Maria, it was like love at first sight. I get tears of joy thinking about it, I love her so much,” Mr Vatiliotis said. 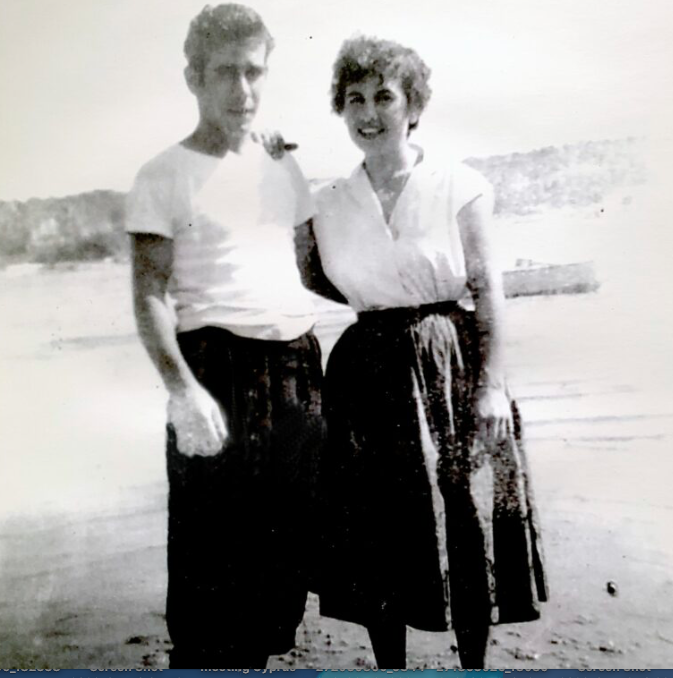 Harry and Maria Vatiliotis on the beach (1950s) Photo: Supplied
The self professed “stoic” is humble about his life’s work, and although Mr Vatiliotis doesn’t hold anything too close to his heart other than his beloved Maria, there have been a couple of moments in his career that have truly moved him.

“Some highlights of my life were when some really talented kids came up. One was a bass player, a genius. He would play things that were difficult on the violin, on the bass. He would perch on the corner of my dining table with one of my double bass’ and perform. That gave me a lot of pleasure. Another one was a little Chinese girl. She came in as an 11-year-old, she played so beautifully. She was going into a competition. She played so beautifully, I couldn’t believe it. Her teacher said she’s using the half size, she wants to go on to a quarter size,” he said.

Mr Vatiliotis reworked the young girl’s old violin for an improved competition ready instrument and “put the sound in it” free of charge.

“When she played the new violin I had tears running down my face.” 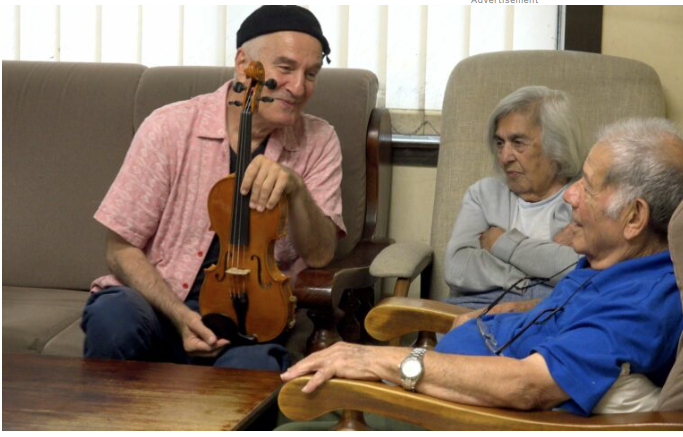 Harry and Maria Vatiliotis are joined by Romano Crivici who holds “The Last Violin” Photo: Supplied courtesy of “The Last Violin”
Ms Thackrah has been spending many months capturing the stoicism, the magic and above all the dedication of Mr Vatiliotis’ age old craft.

“Romano’s original intent for the film was to make a record for posterity, of Harry’s knowledge and experience, gleaned over a lifetime as he made a violin for him. Having made a few documentaries – Sex, Drugs & String Quartets for ABC TV and One Tango Moment as an independent production – I knew the extreme challenges that are encountered in both making the film, finding finance and finally getting it out there into the world; I was not jumping at the chance of doing it again unless it felt like a sure winner. Romano managed to talk me into at least coming along for a day to film,” she explained.

“It appeared unpromising at first – a long slow day of making squeezed up in Harry’s tiny workshop but as the day progressed, I began to see that the wonderful, loving interactions between Harry and Maria, his wife of 62 years, and Romano were unique. This as a backdrop to Harry’s meditational focus in making a fine violin from a few lumps of wood, captured me as I think it will capture an audience starved of seeing what is both gentle and beautiful on television.”

While Mr Vatiliotis’ craft is centuries old, it still lives on. While he might retire from his career after making his last violin, it won’t be the last of him.

“People ask me ‘When are you going to retire?’ I’ve said I’ll make my last violin as a professional, and then turn to an amateur, making them in my own time for friends. I still want to teach and pass on the trade,” he concluded.

The documentary is slated to be finished up early this year, but given the challenges of COVID-19 the director and co-producers are making sure they can wrap up filming as safely as possible.

The Last Violin is still in its production stage and if you would like to help fund the final phases you can head to documentaryaustralia.com.au/project/the-last-violin/.