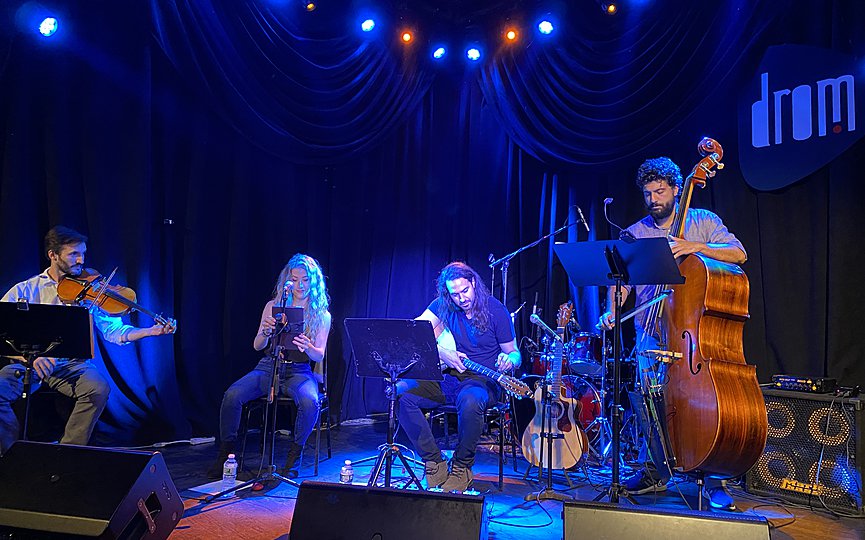 Alex Tasopoulos on viola, vocalist Elena Chris, music director Peter Douskalis on guitar and laouta, and Erikos Vlesmas on bass, at Drom on Manhattan’s Lower East Side on June 11. Photo by Eleni Sakellis

The band Sounds of Cyprus, fronted by vocalist Elena Chris with music direction by Peter Douskalis, performed an evening of traditional music from the island of Cyprus for a unique experience, ushering back the live music scene in New York City on June 11 at Drom on Manhattan’s Lower East Side.

The talented musicians in the ensemble, including Chris on vocals, Douskalis on guitar and laouto, Alex Tasopoulos on viola, and Erikos Vlesmas on bass, performed classic Cypriot favorites from the traditional repertoire including songs by Hadjimichael, Tokas, Ioannidis, and Violaris, among others.

Chris and Douskalis offered a brief introduction in Greek and in English to a few of the songs to start off the performance. The audience members applauded enthusiastically throughout the musical evening which highlighted the skills of the talented, young musicians who are sharing and promoting the beautiful, traditional songs of Cyprus.

Sounds of Cyprus was recently featured on the show `Paradosiaki Vradia’ on RIK1 where Chris and Douskalis were interviewed and a video from one of their recent outdoor performances was featured.

The band Sounds of Cyprus, (left to right:) Alex Tasopoulos, Elena Chris, Peter Douskalis, and Erikos Vlesmas, take their bows at Drom on Manhattan’s Lower East Side on June 11.
Everyone looked forward to the next performance by the band, hopefully in a venue next time with space for dancing.

Elena Chris was born in Cyprus 27th June 1992 and grew up in Nicosia her family noticed she had a musical talent and at six years old she started to learn to play the piano and have voice lessons.
She then met fellow musicians to form the band Sounds of Cyprus Peter Douskalis an American born Cypriot whose mother was from Cyprus and his Father from Greece he played the Guitar. Alex Tasopoulos born the US of Greek and US parents on the Viola  and Erikos Vlesmas on the bass born in the USA of a Greek Father and Cypriot mother.

She started singing professionally at 20 years old and decided to move abroad hoping for a better future and moved to the USA where she sang in orchestras, bands and at clubs.