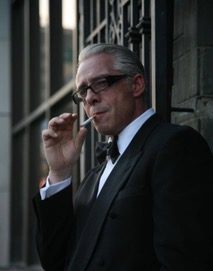 Acclaimed Drama ONASSIS Opens In NYC After Long Awaited Aegean Run
NYC—The name that used to strike fear and envy in many, that of shipping magnet, Aristotle Onassis, will now be coming as an Off-Broadway production. Onassis. The one-man show, written and starring renowned British actor, Anthony Skordi, is slated to open at NYC’s American Theatre of Actors the first week of March.
The curtain will open on a string of performances early winter 2022 in Athens, Greece prior to making the journey across the ocean to New York City. Onassis presents American theatre goers with the chance to listen in on Aristotle Onassis’s inner thoughts as he muses across all aspects of his life, from his poor childhood, acquired wealth and fame, in addition to those famous love affairs and marriages.
Onassis is directed by actor/director Dikran Tulaine with sound and lighting by George Nicholas.
British thespian, Anthony Skordi, represented by Susan Zachary (of The Zachary Co.) thoroughly embraces the role of Aristotle Onassis. Throughout the performance, Skordi completely embodies the Greek force that was Aristotle Onassis. Anthony Skordi is currently filming The Offer in the role of Carlo Gambino for Paramount TV Studios.

Skordi was born in London to Greek Cypriot parents Father from Lefkoniko and mother from Genari a barber and a seamstress respectively.He was born in Whitechapel, London and grew up in Brixton. He attended Drama Centre London, and later toured with the Royal Shakespeare Company from 1990-1992 and Vanessa Redgrave’s Moving Theatre and while travelling with the last theatre in the United States he decided to stay there in 2009.

He is a United States citizen and currently resides in Los Angeles.

Some of his early roles include British television series including episodes of Soldier Soldier, The Bill and Thief Takers.
In 2017, he had a prominent role in Star Wars Battlefront II, both as a voice actor and motion capture actor, as Admiral Garrick Versio. He had also previously provided motion capture for Sleeping Dogs.Since 2015, Skordi has also been narrating the audio drama series John Sinclair – Demon Hunter.

His work in television continued in the United States, where he featured in episodes of Scorpion, The Blacklist, The Last Ship, and others. British TV appearance as series regular as Silas Manatos in Prime Suspect 1973.[ In 2019, he appeared as the Caliph of Oran in the miniseries Catch-22.

Skordi is also a prolific film actor. A short film portraying the Armenian genocide, Straw Dolls features Anthony Skordi in the lead role as Ahmet, a conflicted Turkish soldier. He acted alongside Kevin Spacey in the short film Envelope.