Just before Lockdown Peter appeared in Indecent at The Menier Chocolate Factory. He also wrote, filmed and streamed his own stage show called Falling Stars,

Peter returned to The Harold Pinter Theatre in Jamie Lloyd’s season of Pinter at The Pinter, where he had also starred in Oslo when the NT production of this Tony Award-winning play transferred there, during 2017/18. Peter received an Olivier nomination for Best Supporting Actor in a Play for his portrayal of the role of Ahmed Qurie in Oslo and the play by JT Rogers, was also nominated in the Best New Play category.

He was awarded The Clarence Derwent Award in 2018.

PP appeared at The Coliseum in London’s West End in April/May 2019. He played Sancho Panza in a major new revival of Man Of La Mancha opposite Kelsey Grammar, Danielle De Neisse and Nicholas Lyndhurst. 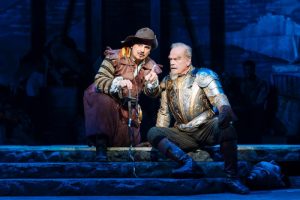 He has also recorded numerous television appearances in Defending The Guilty, Unforgotten and in the new series of Sky Atlantic’s Riviera.

Many online gamers will also know him for his voice portrayal of Herodotus in the very popular Assassins Creed, Odyssey.

He appeared at The Southwark Playhouse in a musical called Working on 8th July 2017. Working was nominated in the Whatsonstage.com awards for Best Off-West End Production. He was nominated for an Olivier Award in 2018.

In 2017 Peter played the role of Vivian Van Damm in Mrs Henderson Presents at The Royal Alexandra Theatre in Toronto opposite Tracie Bennett. He also made a visit to Dubai and played Monsieur Thenárdier in Les Misérables opposite Jodie Prenger as Madame Thenárdier.

Peter’s appearances on stage, in film and television and on radio, have extended over a 40-year career as a professional actor. He is a leading artist in musical theatre, having appeared in some of the most enduring West End Musicals this country has ever seen.

He appeared in LES MISÉRABLES at the newly opened Dubai Opera House, playing MONSIEUR THÉNARDIER alongside Jodie Prenger. He was an original company member in 1985 and it’s his first return to the show since 1995.

He also played COLONEL MAHMOOD in Season Three of TYRANT for FOX TV.

In 2014 he played Louis Charalambous in THE LOST HONOUR OF CHRISTOPHER JEFFRIES for ITV. It was directed by Roger Michel and starred Jason Watkins. The production won 2 BAFTA TV AWARDS.

He played Chris Theodopoulopoudos for five seasons, in BIRDS OF A FEATHER (BBCTV/SELECT TV) which is now playing on ITV in a revival of this enduring sit-com.

By using this site you agree to our Data Retention Policy