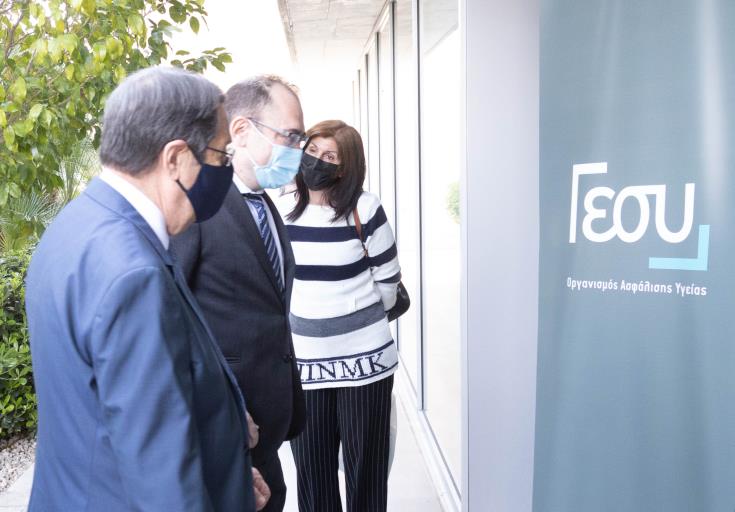 No plans at the moment to either ease or tighten COVID-19 restrictions, President says

The President of Cyprus, Nicos Anastasiades, said on Wednesday that there are no plans at the moment to either ease or tighten restrictions for COVID-19 and pointed to Cabinet decisions during a session, on April 24, ahead of Orthodox Easter.

The President paid a visit to the headquarters of the Health Insurance Organization, on the occasion of World Heath Day and praised those who contributed in introducing the General Healthcare System (GHS) in Cyprus, along with “frontline heroes.”

The President said that in only two years, a complete healthcare system has been deployed “but this doesn’t mean that there aren’t still problems.” Taking into account the brief period of time, the contestations against the GHS and past difficulties “I deemed that I had to be here to express the state’s gratitude for what it managed to offer to the Cypriot people, that they had been anticipating for decades.”

Replying to a relevant question, the President said that he had earlier on Wednesday a meeting with the scientific advisory team to discuss the epidemiological situation. For the moment, he went on, epidemiologists are not voicing very serious concerns “but this does not mean that we are not going to monitor the epidemiological situation on a daily basis.” What we are interested in, is to see that there is at least a stabilisation when it comes to patients’ admissions, in order for the health system to be able to cope, he added.

He said moreover that there is a need to protect lives, but we should not overlook people’s fatigue, as well as the need for the economy to continue working. “Therefore, at the moment there are no plans to tighten or ease” measures, he added.

He pointed to a session of the Council of Ministers, scheduled for April 24 which will decide on the measures to be taken. The decisions will be in line with the epidemiological situation and the proposals coming from the scientists, he said.

Asked about concerns over the AstraZeneca vaccine, President Anastasiades said that there are legitimate concerns on the part of the citizens, but so far data indicate that those who may suffer from some side effects are “one in a million.” We will await the decisions of the European Medicines Agency and we will act accordingly, the President concluded.