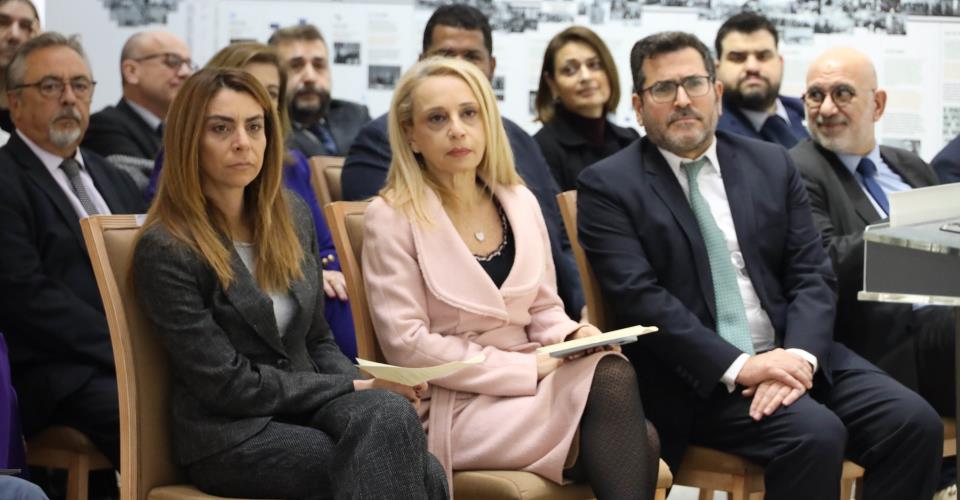 The 2nd Annual award for human rights “Stella Soulioti” by the Ministry of Foreign Affairs was awarded to founder and honorary president of NGO Cyprus Stop Trafficking (CST) Androula Christophides Henriques for her role and contribution in tackling human trafficking in Cyprus.

The award was given to Henriques on Friday during an event at the MFA, in the presence of Minister of Justice, Deputy Minister of Social Welfare, Ombudswoman and Commissioner for Justice, Ambassadors and representatives of the diplomatic corps, among others.

Stella Souliotis was the first Minister of Justice of the Cyprus Republic, who later also served as Attorney General and was a pioneer in human rights.

Head of the Organisation Neophytos Neophytou received the award on her behalf and Henriques’ speech was delivered by member of the board Nelson Neocleous, as the recipient could not attend.

Henriques said that when the NGO was established, its enemies were not organized crime but the state, society and judges. She explained that the state was issuing the so-called artist visas, society was providing clientele, and the Judiciary system was unable to find witnesses for cases. “They told us that there was no human trafficking,” she said.

Henriques said that with the assistance and contribution of the then Minister of Interior Neoklis Silikiotis, the artist visa was abolished and all the night clubs were closed, “but the problem did not disappear.”

She said that there is still a problem and the fact that only five victims were accommodated in state shelters last year proves that simply only a few victims are identified and recognised as such.

She also referred to the role of current parliamentarian Rita Superman, who, as a police officer, was actively involved in the issue of human trafficking and collaborated with the Organization in which she showed trust, as well as to the contribution of late Minister of Labour Zeta Emilianides.

Honorary President of the NGO said that the huge issue of bureaucracy that creates obstacles in the issue of human trafficking needs to be addressed. She described Stella Souliotis, in whose memory the award was established, as a role model.

Last year’s recipients Maria Haviara Koushiou on behalf of SPAVO and Andri Neokleous on behalf of Hope for Children, also addressed the event and referred to the actions they undertook in 2022.

In his speech, Foreign Minister Ioannis Kasoulides said that Henriques is one of those rare personalities who significantly contributed towards alleviating human suffering and fighting against the violation of human dignity.

He said that in assessing the numerous candidates for the year 2022, the Committee of the ‘Stella Souliotis’ award has decided to grant it to Androulla Christofidou Henriques, honouring her long-standing, tireless and impactful work against human trafficking.

Kasoulides said that 15 years from its establishment “Cyprus STOP Trafficking” Organization continues her legacy by supporting victims of human trafficking, as well as by forging a zero-tolerance approach towards this scourge in Cyprus.

The Minister also said that on December 10, we commemorated the 74th anniversary of the signing of the Universal Declaration of Human Rights, which is a milestone in the history of humankind’s effort regarding this most sacred good and remains a shining beacon for progress and justice.

However, he noted, we express grave concern as we witness an ever-increasing pressure on human rights. According to the Minister, the COVID pandemic, the environmental crisis together with the tremendous impact of the war in Ukraine, are proof that we need to redouble our efforts in order to safeguard and promote Human Rights and Fundamental Freedoms.

“Therefore, there is still a great deal of work to be done in order to achieve the standards of the Declaration,” he said.

Kasoulides also said that the international human rights agenda has always ranked high amongst the priorities of Cyprus. “On a wide range of issues such as gender equality and the fight against human trafficking our firm commitment to the protection and promotion of human rights is imperative,” he said.

Kasoulides also noted that as staunch proponents of multilateralism and international cooperation, the Republic of Cyprus has decided to present its candidature for the first time, to the Human Rights Council for the period 2025-2027. We are confident, he concluded, that Cyprus, if elected, will make a meaningful contribution as a member of the Council.