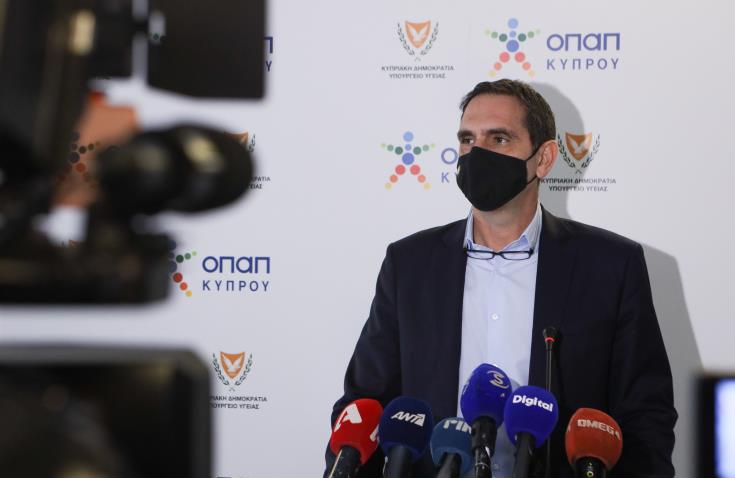 Cyprus Health Minister Constantinos Ioannou has expressed concern over the spread of the British coronavirus variant in Cyprus and has urged the public to comply with measures in place to contain the pandemic so that “the worst scenario can be averted.”

In statements after a meeting with the leadership of the State Health Services Organisation, Ioannou said that the capacity of state hospitals to treat patients with coronavirus has been raised from 250 beds last January, to 400, a press release by the Health Ministry says. He also explained that the reason that this capacity cannot increase further is purely to do with the lack of human resources.

This, he said, is a problem faced by all countries and that is why most European countries have imposed a full lockdown since last November.

Referring to the gradual easing of measures which has been in place since Tuesday, he said that decisions were made faithfully following the recommendation of experts and taking into consideration the public`s fatigue. But, he noted, so far the situation with new cases has not stabilised “which is a cause for concern.”

“We appeal to the people, we ask for people`s cooperation so that the measures can be as effective as possible,” he said, adding that it is important for everyone to understand that “it is up to us, individual measures.” “Our lives are in our hands; We are in the last stretch of the marathon and we ask for this cooperation,” he noted.

Replying to a question about results from positive samples sent to the ECDC for the detection of variants, Ioannou said that the latest information from the ECDC show that the British variant was present in all 45 out of 45 samples tested.

The Minister of Health added that number of hospital admissions was the same during last December as it is in merely a week now.

This, he noted, shows that transmissibility has greatly increased and as a result hospitalisations.

“We need to be even more careful in relation to our contacts, and in following personal protection measures, because it is extremely dangerous,” he added.

Replying to a question about the AstraZeneca vaccine, Ioannou said that the 37 incidents of thrombosis reported in 17 million vaccinations constitute a percentage which would be observed in 17 million people who have not received the vaccine. He explained that vaccinations have temporarily been postponed and said that following the EMAs opinion on the matter today, which is expected to be a positive one, new appointments will be set next week.

Asked when the Janssen vaccine will be available in Cyprus, he replied that the first quantities are expected to arrive in mid-April. In total 200,000 vaccines by Johnson & Johnson have been ordered and it is expected that 55,000 doses will be delivered in the second quarter, he added.

Replying to a question about the Russian vaccine Sputnik-V the Minister of Health said Cyprus has decided to enter in a pre-negotiation of purchase which will be activate when the vaccine is licensed in the EU.