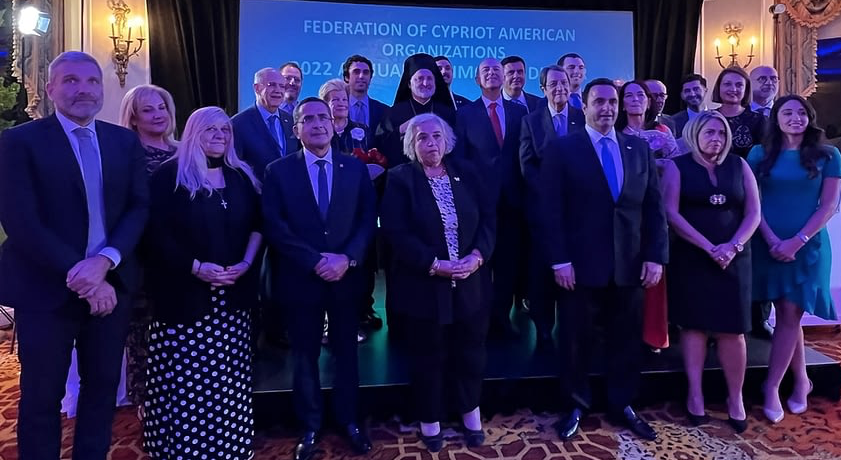 In an emotionally charged atmosphere, due to the presence of Republic of Cyprus President Nicos Anastasiades whose term of office is coming to an end, the Federation of Cypriot-American Organizations (FCAO) Annual Testimonial Dinner was held on September 23 at Terrace on the Park in Flushing, NY, with Dr. Kyriacos A. Athanasiou, professor of Biomedical Engineering at the University of California, Irvine, as the recipient of the FCAO Lifetime Achievement Award.

In the wake of the 77th UN General Assembly, which left many fronts open and many issues in Greek national affairs still pending, due to Turkish provocation and intransigence, the representatives of the Greek Cypriot diaspora had the opportunity to express their thanks to President Anastasiades and also recognize a distinguished scientist, who is considered a great role model for his rise from humble roots.

Dr. Athanasiou recognized the contribution of his parents who, although they were poor and not at all educated, opened the way for him to his education and the development of his personality.

In addition, he emphasized that what was required for him was, leaving professional and financial recognition in the background, to pass on to his children the principles and memories of Hellenism. 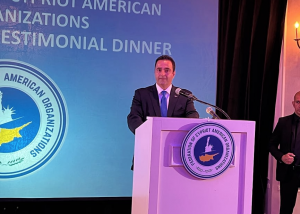 Federation of Cypriot-American Organizations President Kyriacos Papastylianou speaking during the Annual Testimonial Dinner on September 23. Photo: TNH/ C. Athanasatos
Among those present were Foreign Minister of the Republic of Cyprus Ioannis Kasoulides, government spokesman Marios Pelekanos, Deputy Permanent Representative of Cyprus to the UN Menelaos Menelaou, Ambassador of Greece to the United States Alexandra Papadopoulou and her counterpart from the Republic of Cyprus Marios Lyssiotis, Permanent Representative of Cyprus to the UN Ambassador Andreas Hadjichrysanthou, Diplomatic Office of the President Deputy Director Koula Sophianou, Consul General of Greece in New York Konstantinos Konstantinou, Consul General of the Republic of Cyprus Michalis Firillas, and Consul of Greece Dimitrios Papageorgiou.

Dr. Athanasiou was introduced by his wife, Kiley Athanasiou. The program was coordinated by Arianna Christou and chaired by FCAO Vice President Nicos Paphitis.

“Let’s continue despite the disappointment”

FCAO President Kyriacos Papastylianou criticized the attitude of Turkey and its president, Recep Tayyip Erdogan, expressing, however, his satisfaction with recent important developments, such as the lifting of the U.S. embargo on the sale of arms to the Republic of Cyprus, giving credit to Philhellenic Senator Robert Menendez.

“I publicly thank Senator Menendez for his unwavering support over the years. I would like to thank all the senators and members of Congress who support us in all our national issues as well as the government for upgrading U.S.-Cyprus relations,” Papastylianou said, also addressing President Anastasiades.

On the same wavelength, PSEKA President Philip Christopher noted that, despite any frustration that prevails over the absence of a fair solution to the Cyprus problem for 48 years, nevertheless, Cypriot Hellenism must continue the struggle, especially since the situation in Ukraine showed the general public what invasion means. 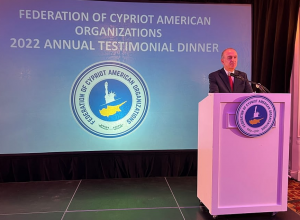 Dr. Kyriacos A. Athanasiou, professor of Biomedical Engineering at the University of California, Irvine, was the recipient of the FCAO Lifetime Achievement Award. Photo: TNH/ C. Athanasatos
“We have an opportunity for the American public to learn the truth about what happened in 1974. Have the powerful Cypriots donate money to campaign in the U.S. With our successes in lifting the embargo, with the relevant bills, the expulsion of Turkey from the F-35 program and the F-16 issue, we have demonstrated that we have the power to help Cyprus and Greece,” said Christopher.

Archbishop Elpidophoros, Honorary Co-Chair of the event with President of Cyprus Nicos Anastasiades, said: “All of us want justice for Cyprus. All of us want peace. And for this reason, we will never stop demanding for the Turkish troops to stop the illegal occupation of almost half of the island of Cyprus. We can never stop working until we achieve this result. Unity must prevail. Justice must prevail. And if these come to pass, then the bright future of Cyprus will be assured for many generations to come.”

His Eminence continued: “As much as Professor Athanasiou had dedicated his life to relieving the suffering of his fellow human beings, we must all re-dedicate our lives to relieving the suffering that has taken place in Cyprus once and for all. Your recognition of Professor Athanasiou this evening is a reminder to the world of the talent, ingenuity and brilliance of the Hellenes of Cyprus… All of you here tonight represent the best of the Cypriot Diaspora. Your hearts beat with Cyprus. The air you breathe on a daily basis is never without the fragrance of the land, sea and fair winds of Cyprus. While you have honored one of your own this evening, the honor truly belongs to all.” 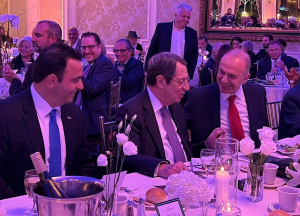 Anastasiades: Gratitude to the community

In his particularly moving speech, President Anastasiades noted his emotion at the fact that he is addressing the Greek Cypriot diaspora for the last time as president and especially to the attendees of the annual dinner, highlighting the “deep gratitude” he feels for their contribution.

“I thank you from the bottom of my heart, as does all of Cyprus. You honor us, you have strengthened us and the fight without your contribution would have been much more difficult,” said President Anastasiades.

Afterwards, the president of the Republic of Cyprus gave a brief assessment of his tenure, declaring himself justified for the steps forward in the Cypriot economy compared to ten years earlier, when he took over a State on the verge of bankruptcy.

“We overturned the adverse consequences of the economy as well as the discords that had been created. To create the conditions for the homeland to do well. I will leave behind a country that is distinguished primarily by its belief in the ideals of freedom and justice, but also completely protects economic freedom, business, we have built a social state,” said President Anastasiades, noting his disappointment at the fact that the desired steps were not taken to resolve the Cyprus issue, due to Turkish intransigence.

Finally, the president of the Republic of Cyprus praised Dr. Kyriacos Athanasiou, characterizing him as “a scientist who made our small homeland, greater,” while he sent a final message to the Greek Cypriot diaspora.

“Keep the flag of our Greece and Cyprus high. Keep our ideals and defend our country, as you have done for the past decades. He who perseveres wins and this will happen in the end, because justice will prevail, despite the hypocrisy that distinguishes some- I had the audacity to say about the UN and some people who turn a blind eye,” Anastasiades said.