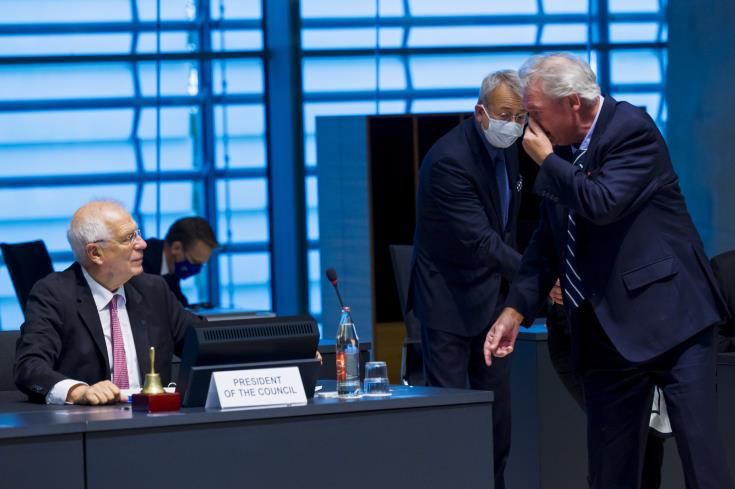 The EU will be present at the conference on Cyprus, convened by the UN, both in the initial phase in Geneva and in the next phase of in-depth negotiations, a senior EU official told CNA in Brussels, during a press point ahead of the forthcoming Foreign Affairs Council (FAC) of Monday.

The senior EU official pointed out that “the Cyprus issue is one of the most difficult diplomatic issues, but whatever the solution, it will be implemented with the island inside the EU, we have the acquis communautaire, it is a logical consequence that we will be there”.

He also explained that Turkey is one of the topics at the meeting of the Foreign Affairs Ministers on Monday and pointed out that “there is more unity in the Council than ever on the issue of Turkey among the Member States”.

In particular, the official said that “the High Representative`s report will be comprehensive and contain a description of Turkey`s behavior, taking into account all the different possibilities. The measures obviously remain on the table, they are not withdrawn and this will be part of our political guidance”.

The official reminded that the EU is also monitoring the human rights and rule of law situation, but whether there will be a reaction, such as sanctions under the new EU regime, “is up to the Member States” in the next phase.

He reiterated that “the situation in the Eastern Mediterranean has improved”, adding that “the positive agenda covers everything in EU-Turkey relations”.

According to the official, the discussion on Turkey at the FAC will prepare the leaders` discussion at the Summit. The official noted that the situation in the Eastern Mediterranean is better, but all policy options remain on the table, including both a positive agenda and the call of some member states on additional listings.

The discussion on Turkey will feed into the Member States` comments on the report prepared by the High Representative and will be presented to the leaders, the official explained.

As announced later, the President of the European Council will have on Friday, 19 March 2021 a video conference with President of Turkey Recep Tayyip Erdoğan and Commission President Ursula von der Leyen at 13:15 CET.