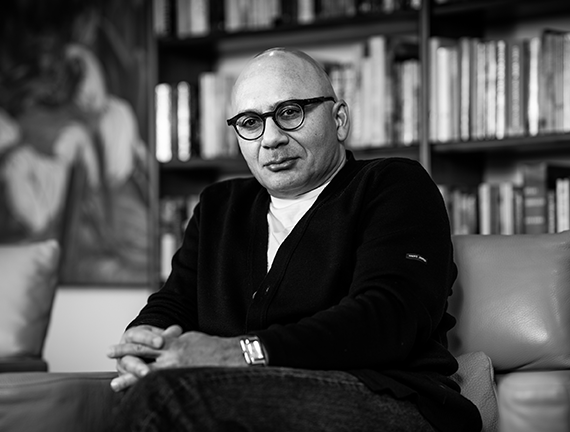 Debut novelist Metin Murat lays a path to tolerance and reconciliation through his debut historical novel The Crescent Moon Fox, This follows the publication of research funded by the LSE Hellenic Observatory .

Set in Cyprus from the 1930s to early 2000s, The Crescent Moon Fox is a compassionate, heart-breaking, brutal and occasionally humorous novel about Cypriot Turks. The reader is immersed in the lives of the inhabitants of a village during the lead-up to independence from Britain, and the tragic aftermath of post-Colonial Cyprus through the lives of two young men: Zeki is shaped and nurtured by the British Colonial system and destined for great things; Aydin is a misfit in his community who, in his own complex and disturbing way, achieves greatness and redemption.

Metin Murat takes his reader on an emotional, spiritual and cultural journey, revealing the glory and trauma of Cypriot life. Through a group of diverse characters Murat reveals the true story of Cyprus from a non-partisan perspective reflecting both Greek and Turkish aspirations. Zeki and Aydin grow up on an island that today is divided physically, emotionally, and culturally and where what is shared – heritage, DNA, humanity – is all too often forgotten and lost to nationalist rhetoric. The reader will never think of internecine struggles in the same way again.

Metin Murat is a British-born Cypriot Turk. He grew up in a multi-cultural environment with deep exposure to English, French, and Welsh cultures. For much of his working life he has had close ties with North Africa, the Levant, and the Gulf. He currently lives in France with his wife.

He received his history and literary education from Aberystwyth University with an undergraduate degree and later a PhD, via a Master’s degree at Lancaster University; and his business education from the London School of Economics.

For much of his adult life, Murat worked for a multinational organization before setting up his own company in 2011. This is his debut novel, realizing a dual ambition: to tell the story of his father’s community, the original Turkish community of Cyprus; and to use literature as a path to tolerance and reconciliation.

When asked what prompted him to write this book, Murat said that “in writing The Crescent Moon Fox, I had two main goals: to tell the story of my father’s community, the original Turkish community of Cyprus; and to use literature as a path to tolerance and reconciliation.”

On whether it is a love story or a war story, the author replied: “Ultimately, it is a story about identity. The search for identity for the storyteller, for Cyprus as a country, and for its people as Cypriots. Each character reveals their particular humanity.”

When asked how a Turkish-Cypriot author came to be published by a Greek-Cypriot publisher, Armida Books, Murat said: “When I sent my manuscript to Armida, I knew I was asking a great deal. The author Panos Ioannides was the father of Armida’s founder, Haris Ioannides. As a writer I admire the work of Panos and through his stories came to understand the emotions and the perspectives that our Greek Cypriot compatriots have on us Turkish Cypriots and the whole 1974 experience. These are vitally important but not easy sentiments to digest. His work reinforced my belief that we Turkish Cypriots have to give our perspective, our story without demonizing our compatriots, if we are to make progress in our intercommunal dialogue. This is not to underestimate the political hurdles we face. However, I hope that one day all Cypriots can live together in safety, without tribalism and without long-held grievances poisoning their present and their future.”

Of choosing the period of the 1930s to 2000s, Murat noted that “on one hand it allowed me to show three distinct periods: Colonialism; Independence; and aspects of modern day Turkish Cypriot Society. On the other, it allowed me to write a love song for Britain as a Colonial Power and the Britain of the 1950s. In today’s world British Colonial rule, across various different countries, is all too often lumped together uncritically and condemned, when in fact there were some societies that benefitted from British Rule – political rhetoric aside, and in the historical context, I would argue the Turkish Cypriot experience of British Colonialism was very positive. Britain in the 1950s has for a long time fascinated me and in the novel I chose to pay tribute to that era and certain elements of British society.”

Of the other main themes in the book, the author said: “Education is an important theme. I wanted to give voice to the illiterate women of Cyprus, women like my own aunt, and challenge the narrative of ‘gendered subalterns’ (in post-Colonialism, women are doubly subordinated through their religion and their gender). All humanity has value. The gift of education is also seen from the female perspective, given by a husband to his wife. It also plays to the ethos that I grew up with that the educated person has the obligation to speak up for those within the community who do not have education.”

“I also explore other traditional notions of gender, particularly the ‘machismo’ male,” Murat continued. “Another main character, Aydin, is gay and one of the bravest characters in the book, challenging those who threaten his village and living out his own personal tragedy.”

“There are many global issues in the book, issues that are the same in Greek-Cypriot and Turkish-Cypriot society. This grain of rice reflects the whole world,” Murat concluded.