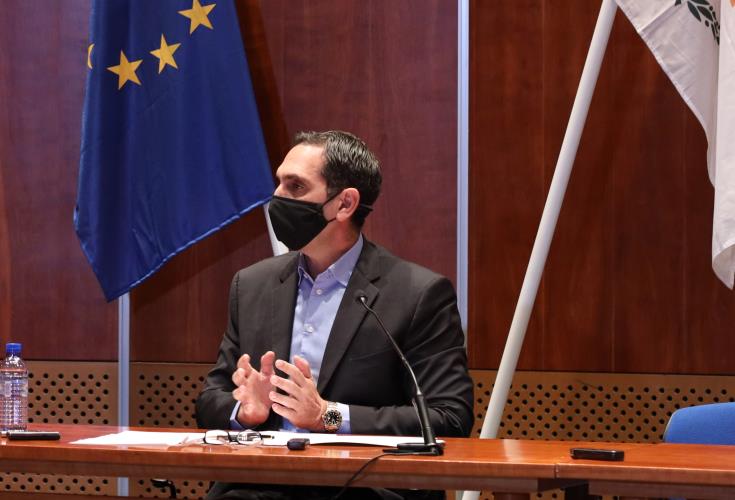 Cyprus Health Minister Constantinos Ioannou announced on Friday a number of measures, aiming to curb the spread of COVID-19, from next week onwards, saying, among others, that Limassol elementary schools physical presence operation will be suspended for the next two weeks, that restaurants will be able to resume operations outdoors and that a curfew in place from 2100 hours until the early hours of the morning will be moved to 2300 hours. The measures will be in place from next Tuesday.

Cyprus Health Minister Constantinos Ioannou announced a number of measures from next week onwards, including that Limassol elementary schools physical presence operation will be suspended for the next two weeks, that restaurants will be able to resume operations outdoors and a curfew in place from 2100 hours until the early hours of the morning will be moved to 2300 hours.

Ioannou, said the measures were decided having taken into consideration the increased burden placed on the health system and the psychological effects the measures have been having on society as a whole.

Addressing the press conference, he said that from the epidemiological data reviewed by the Cabinet show that the situation concerning the pandemic is “at a crucial point,” adding that the situation has become worse particularly in Limassol District, that an increased transmission is observed in areas such as elementary schools, the workplace and within families. He also said that the increased transmission is now connected with the British coronavirus variant which on the basis of data by the ECDC is present in positive samples in Cyprus by 25.7%.

Referring to hospital admissions in recent days he said that most transmissions happened within a family or friendly environment as well as in the workplace, adding that the mean age of people needing hospital treatment has dropped and otherwise healthy people of a younger age are being admitted after developing strong cardiorespiratory symptoms.

The more serious epidemiological picture and the increase in the number of hospitalized patients is cause for concern and for vigilance, Ioannou said, adding that if admissions continue in the same rate the health system’s protection as well as the key goal of saving lives will be placed in danger.

On the other hand, the Minister of Health noted, we understand the strong concern of the experts that psychological fatigue has spread to society as a whole after a year of unprecedented and difficult conditions and the fact that measures in place have not paid off due to this fatigue.

The challenge will be “to strike a balance and to move forward towards the end of this health crisis with safety.”

He added that the measures can be divided into to pillars:

A percentage of 25% of employees in the service industry will have to be submitted to a rapid antigen test on a weekly basis; the operation of elementary schools in Limassol district with the physical presence of students is suspended; high schools continue to operate on line across Cyprus.

Measures aiming to increase compliance and to boost morale

From Monday March 15 (Green Monday) up to 6 people from different households will have access to squares and parks using a protective mask; only on that day access to picnic areas and damns will be allowed; from March 16 outdoor spaces of restaurants will be allowed to operate adhering to a strict protocol which will be published; from Tuesday March 16, the evening curfew will be moved from 2100 to 2300 hours.

The Minister of Health asked everyone for their cooperation, contribution to the effort and understanding.

“We understand that the great sacrifices made by everyone has resulted in fatigue,” he said.

“We have at our disposal the weapon of immunization and our need to return to our normality as soon as possible is expressed by the eagerness of thousands of our citizens to be vaccinated,” he added.

He continued noting that the rate of vaccinations will increase in the coming weeks which is a source of optimism for a safe future. Until then he urged people “to responsibly continue to abide by the measures.”