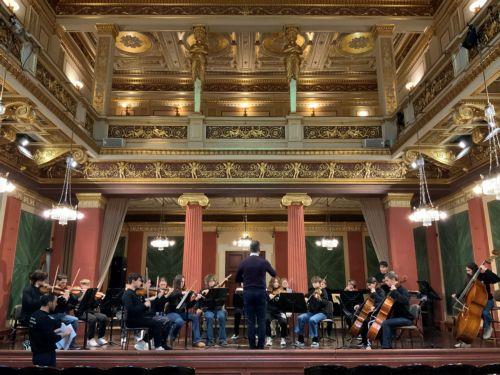 The concert was organised by the Cypriot Cultural Centre in Vienna, with the support of the Ministry of Education, Sport and Youth and the Cultural Services of the Deputy Ministry of Culture, according to a press release by the Cyprus Symphony Orchestra Foundation.

It is noted that the “Zypriotisches Galakonzert” has been established in the musical life of Vienna, after being initiated by Cypriot Baritone, Kyros Patsalides.

For the sixth year, at the Brahms Saal of the famous Musikverein, Vienna, two Cypriot youth music ensembles met on stage with renowned soloists: the ensemble of the Cyprus Youth Symphony Orchestra and the choir of the Nicosia Music School, the press release says.

It is added that during the general rehearsal, attended by First Lady, Andri Anastasiades, Minister of Education, Sport and Youth Prodromos Prodromou and Vice President of the Cyprus Symphony Orchestra Foundation, Athena Xenidou, the young musicians announced their unanimous decision to name Kyros Patsalides as Honorary Soloist of the Cyprus Youth Symphony Orchestra. This is the first time that such an honour is awarded in the orchestra’s 35-year history.

It is noted that the concert aims to enhance the promotion of Cypriot Culture abroad.