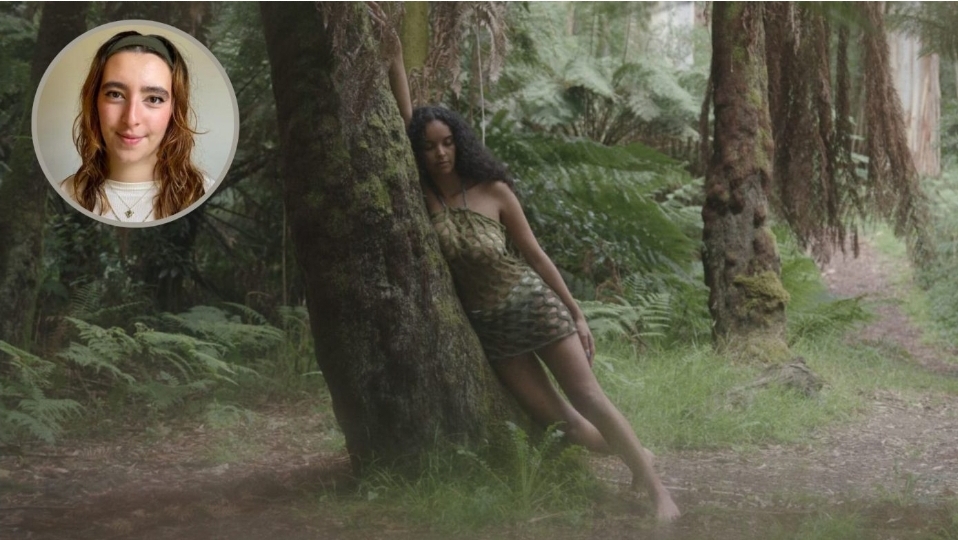 Young Melbourne artist, Lauren Mavromati-Bourke, recently featured in the ‘Ahead of the Curve Digital Artwork Commission.’In her artwork, Lauren showcases her Cypriot ancestry through a short film featuring her own collection of knitwear that she says is reminiscent of the women that came before her.

Speaking with The Greek Herald, Lauren details her journey to design and how she came up with the idea for her new collection.

Tell us about your journey to design.

I always wanted to be in design but wasn’t sure of my place. About two years ago, I was exploring my own personal and cultural experiences, including researching the intersections of transgenerational trauma, gendered trauma and the ongoing effects of colonisation. As I spent more time learning about my Cypriot culture and my identities, I found that design was a way to explore who I was, as well as a way to connect with my community. I continued developing these themes by researching the literature and engaging in conversations and storytelling with BIPOC (Black, Indigenous and People of Colour), queer and gender diverse communities.

My girlfriend sent me the commission saying it would suit me and we applied! I always wanted to make a short film but wanted support making it as it would be my first time, so this seemed like the perfect opportunity. The film features my graduate collection of knitted garments, and depicts a queer sanctuary in the form of an imagined island that is shielded from colonial cis- and heteronormative gazes. Although these textile practices are borne out of transgenerational patterns of trauma, the knits are shown as pieces to be worn joyfully, designed for queer communities to wear as they move, dance and stretch.

A lot of things inspired the film. It’s a continuation of my graduate collection called ‘Entanglements Between Bodies & Borders,’ which was inspired by women’s and gender diverse communities’ resistance following the 1974 war in Cyprus and its ongoing impacts for marginalised communities. I had read and heard a lot about how collective experiences of invasion were mostly understood from patriarchal perspectives, with marginalised communities’ stories often left untold or hidden from the dominant narratives. By focusing on textile practices which were used by women to express these stories, I was able to instead explore how knitwear and other textile handicrafts can be used therapeutically and to connect across generations.

My Cypriot heritage greatly influences my work. My yiayia was a huge part of my life and her encouragement and support meant that I never felt limited to only exploring Cypriot culture without also exploring other parts of my identity.Working on my brand! I just released my first collection of knitted tops a few weeks ago, and am also creating custom garments as I begin work on the second collection. I’m planning to release this next collection at the end of the year, and will be experimenting with new designs including more masculine silhouettes. As well as designing knitted garments, I also enjoy creating soft sculptures and would love to explore this further in future.

Eventually, I hope to also one day open a shop that stocks emerging designers, as well as being a hub for community events and local art.