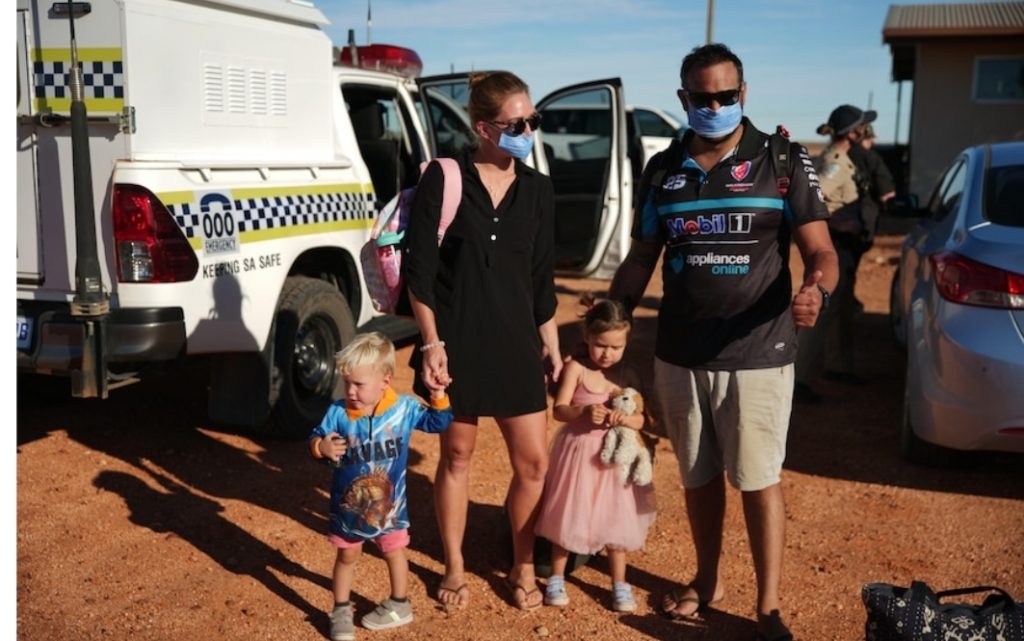 After five days stranded in a bogged campervan in the Simpson Desert with their two young children, Ori and Lindsey Zavros were smiling as they arrived in Coober Pedy.

The Australian Cypriot family Zavros family became stuck in the Simpson Desert last Friday.
A police helicopter rescued them after five days.
They plan to continue their camping trip once their camper van has been recovered

“It’s been emotional, a bit of a rollercoaster but we got through it.”

The Perth couple and their two children Zoe and Zane had been enjoying an around Australia camping trip in their customised campervan for the past year.

They were about 150 kilometres north-east of Oodnadatta in the remote Simpson Desert when things took a turn for the worse.

The family has been on a camping trip around Australia for the past year. (ABC News: Haidarr Jones)

They activated their emergency beacon at 10am last Friday after the roads became inaccessible following torrential rain.

“After the first couple of days we sort of realised that we wanted to get out of there pretty quick,” Mr Zavros said.

Temperatures are expected to rise above 40 degrees Celsius later this week in the region.

“We were concerned that we might have got stuck there for a few weeks, worried about the heat,” Mr Zavros said.

“Thankful that it’s over now.”

The family had to be airlifted out of the desert. (ABC News: Haidarr Jones)

On Sunday, emergency supplies were air-dropped to the family including a satellite phone.

Mr Zavros said it was a big relief to be able to contact their family.

“As soon as they dropped that sat phone to us, we were safe,” he said.

“That made things a lot easier, once we were able to talk to them, everyone was relieved.

“They were obviously worried hearing that the beacon had gone off.”

Zoe and Zane Zavros were in good spirits after their ride in the helicopter. (ABC News: Haidarr Jones)

A police helicopter was sent to rescue them on Tuesday, with the family winched to safety just after 4pm.

The helicopter refuelled in Oodnadatta before dropping the family in Coober Pedy.

“Thank you to all the people that sent out the beautiful messages and everyone who has helped get us here,” Mr Zavros said.

“All the police and the search and rescue teams, we are just forever grateful to them.”

Mr Zavros said they kept their spirits up by eating icy poles and watching Bluey DVDs.

“We had a daily ritual where we would go for a walk in the morning and then have an icy pole at lunchtime and then go for walk in the afternoon when we could,” he said.

Ms Zavros said it had been an “adventure”.

“Little mistakes that we made that we wish we didn’t make but we wouldn’t change it, it’s shaped our trip,” Mr Zavros said.

The couple said they would now have to find a way back to Perth.

“Go to Perth for Christmas and then once the truck has been recovered we will come back out and keep going,” Mr Zavros said.

“I think we will crack a cold beer and a champagne.”

Oris parents Lagis and Theophanous are from Nicosia and Famagusta respectively.
His late Grandfather was Christos Zavros a journalist and writer in the UK.