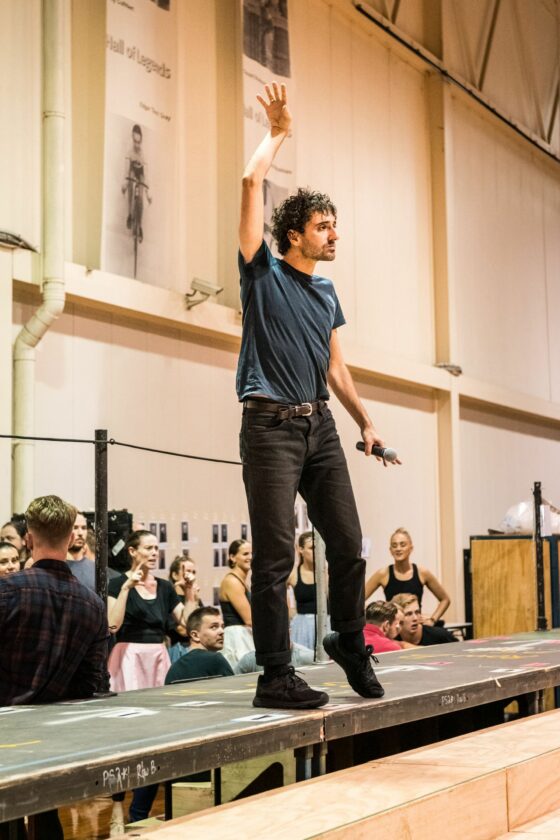 Last year, in between COVID lockdowns, opera revival director Constantine Costi was able to bring to life Giuseppe Verdi’s masterpiece La traviata for the spectacular Handa Opera outdoor production on Sydney Harbour. In two weeks’ time he will be in Melbourne to ensure that audiences take pleasure in a full Opera Australia production.

Mr Costi is busy reviving and adding his interpretation to the Elijah Moshinsky production of La traviata (The Fallen Woman) which was first performed in 1989 and which will open at Melbourne’s Arts Centre on 4 May to run until 28 May.

“This production has one of the most exquisite of sets, there is great historical accuracy in the costumes and it reflects the sumptuousness of the period (1850s). My job is to bring the production to life with a new approach,” Mr Costi told Neos Kosmos.

Opera Australia Revival Director Constantine Costi offers directions during rehearsals for Verdi’s great opera La traviata which will be performing at Melbourne’s Arts Centre next month. Photo: Supplied/Opera Australia
“Moshinsky was one of the great Australian opera directors. His production is a template, but I have to tap into the fire of the performers. He would have hated it if this production was a replication of his work. … The fundamentals are there: to recreate the drama, while also being moving and truthful.”

One of his challenges is to create the close atmosphere for Violetta’s (the main character) Paris salon where much of the action in the opera takes place, with a cast of up to 100 people providing the vocal power for the famous opera.

“It is a logistical challenge to create a salon atmosphere that is as intimate as possible so that it will involve the audience.

Australian soprano Stacey Alleaume will reprise the role of the heroine, Violetta, whose tragic death is at the heart of the famous opera. The story is based on the 1848 play, The Lady of the Camelias by Alexandre Dumas fils – the son of the famous author of The Count of Monte Cristo and The Three Musketeers.

Mr Costi said the COVID pandemic had been a devastating break but there had since been an increase in morale and everyone in the production was very happy to be back.

“The new normal is that we work as hard we can and as safe as we can.”

And he is hard at work. While he has until opening night on 4 May to ensure La traviata is ready for Melbourne, he is also directing a Kurt Weill opera double bill at the Old Fitz Theatre, The Seven Deadly Sins and Mahagonny Songspiel as part of the Goethe-Institut’s 50th anniversary in Australia.

Then he will be leading rehearsals for the Baroque period opera Orontea which will be performed with instruments used in the 17th century.

Next year, he is taking on an assistant director’s role for Opera Australia’s mammoth production of Richard Wagner’s epic The Ring Cycle – four operas based on German and Norse legends running for 12 hours and performed over three nights challenging performers and audience.

But for now, his focus is getting La traviata ready for Melbourne audiences.

“La traviata is one of the most beautiful heart-breaking love stories ever told. It is about infatuation, love and death. If you have never seen opera before, this is the one to see,” Mr Costi said.

“I am Greek Cypriot from my dad’s side. My pappou came here in the late 1940s. He started a little fish shop in Lakemba and then he, my dad, his brother and his siblings all went off to start different versions of De Costi Seafoods.

“I grew up at the fileting bench next to my dad and what this taught me and I can apply in my job at the moment, are all these basic skills. About keeping your composure, about working hard. I can owe all that to my upbringing,” said the young director.

Costi also revealed that although very successful in what he does, he “didn’t grow up in the Opera.”

“I came in quite late. I always had this association that opera was something hard to understand or that it was overwhelming but what I discovered and what I love about it is that on a fundamental level it’s quite simple. It’s an incredibly beautiful, heart breaking, exhilarating story told through the medium of song and music.
♦ Opera Australia’s production of La traviata will be performed at the Arts Centre in Melbourne from 4 to 28 May.