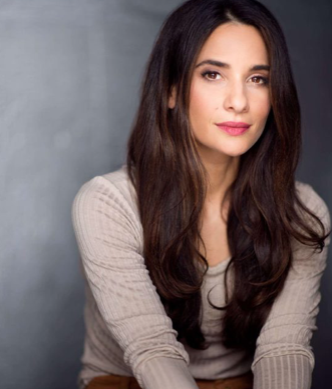 Greek Cypriot Australian Andrea Demetriades has made a strong name for herself in television and on stage. This time she returns to our screens as “high-flying American CEO” Martha Drewe in SBS’s enthralling television drama The Unusual Suspects.

“I play a very small part, but it is pivotal in the main protagonists’ journey,” she told Neos Kosmos.

The story follows the case of an elaborate heist set in Sydney’s glamourous Eastern Suburbs, played out by an all-star, diverse cast featuring names such as Aina Dumlao, AACTA award-winner Miranda Otto and Michelle Vergara Moore.

“As soon as I read the first two episodes, I was just like ‘this is so different and fun with a really amazing cast’,” she said.

“It moves fast…it’s colourful, it’s bright, it’s a bit camp. But it’s really well acted and really quite funny and dark at the same time.”

Filming for the show took place during last year’s strict COVID-19 lockdowns, making way for creative solutions to new challenges that had never been present before.

“I had been a fan of Miranda Otto for years, she’s one of Australia’s most amazing actors so I was a bit nervous, but the first time we met was behind massive shields, wearing these masks and gloves. So rehearsing a scene like that was a bit strange,” Ms Demetriades explained.

Before scoring the role of Martha, the NIDA alum had been finishing up rehearsals for Sydney Theatre Company’s (STC) Home, I’m Darling, when production was halted in its tracks for lockdown, leaving the cast and crew unemployed.

The ability to have any kind of work throughout the pandemic was Ms Demetriades’ godsend.

“This came up, which was great. It was shooting during COVID which was fantastic, because it was quite a breath of fresh air. It was almost a saviour for me, this piece, even though I didn’t have a massive part in it,” she said,

“Everyone was very careful because everyone was so aware of how lucky we were to have a job during that time.”

It was in this time between the STC shutdown and having The Unusual Suspects script fall into her hands when Ms Demetriades truly understood how important it was for us all to have art in our lives.

Unfortunately, the Australian Government has taken a little longer to cotton on to its impact on not only those in the industry, but for those who consume it.

“It was really tough and COVID has hit the arts industry really badly. The Australian Government is always a bit funny about the arts. They like it being there but they don’t really like supporting it. We like to think of ourselves as a really cultured country, but I don’t think our government is willing to put in the money or the effort to support its artists,” Ms Demetriades said.

“People need art in their lives…It’s not a new thing, the Greeks did it a long time ago. The ancient story tellers, even the Greeks having it as a civic duty, you would go to the theatre to learn about the world…they got it right in that respect. The ancient form of storytelling is so important.”

Although the government may be lagging behind in understanding, Ms Demetriades continues on, translating the real world into art for others to consume.

Doing so requires a special type of person who can comprehend the world around them in depth. Ms Demetriades is one of those people.

“The best part is playing on set. You get your script and learn your lines, but it’s all about listening, it’s all about connecting. It doesn’t matter how well you say your lines, it’s all about what’s happening within the scene…It’s so enjoyable because you go ‘what is the human condition and what aspect are we portraying in this scenario?’,” she said.

Lifting the character off the pages to portray them in front of a camera is only half the job it seems. As Ms Demetriades looks over her career and dwells on the kind of impact she wants her work to have, you can tell it fares far beyond simply putting on a good performance.

“When I was doing Pygmalian, this little girl who had Greek parents came and saw the show and she was like ‘oh that’s cool that you’re playing a lead in a show at the Sydney Theatre Company’ and I hadn’t really thought of that because you don’t really think of what you look like or who you are. I just want to be there for the little girls who feel maybe that they’re not represented enough on television or enough on stage or enough in life,” she said.

Ms Demetriades notes that some of her own inspirations included the likes of director Peter Andrikidis, along with actors Alex Dimitriades and Mary Coustas.

“If you’re not represented on screen, you don’t feel like you belong to a society. That’s why this show [The Unusual Suspects] is so great…It’s got an amazing Australian-Filipino cast. ”

Of course shaking up the status quo doesn’t solely fall on Ms Demetriades’ shoulders, but she trudges forward in her own way, choosing projects that reflect the world she lives in to contribute to a more inclusive landscape.